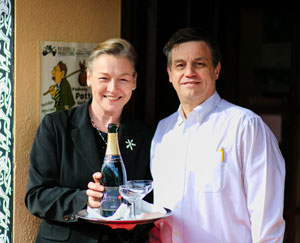 Welcome to Cawley’s Guesthouse Hotel a family run establishment located in the center of Tubbercurry, with private parking and landscaped garden.

Our building has operated as a hotel since 1907. It has been family owned since 1964 when it was purchased by the late Joe and Jean Cawley. The Guesthouse is now owned and run by their daughter Teresa and her husband Pierre Krebs.

Pierre & Teresa have over 35 years experience in the hotel industry and provide a warm and friendly welcome on arrival. Both English and French are spoken fluently by your hosts.

The Guesthouse has 14 spacious and comfortable ensuite bedrooms, a restaurant, a welcoming bar, a terrace, banqueting and meeting room facilities.

“From start to finish the night was perfect. Teresa was always there to anticipate our every need. The food was excellent and the staff were extremely accommodating. Everyone had a fabulous time! A big thank you to Teresa, Pierre &amp; their staff for a wonderful evening.” Liz & Gary

The History of Cawley’s Hotel

The hotel was purchase in 1964 by the late Joe and Jean Cawley and they changed the name of the hotel to Cawley’s. As well as being a hotelier Joe was a dedicated Fire Fighter, Volunteer and Policitian. Joe Cawley was first elected to the County Council in 1967 and was Cathaoirleach eight times with a distinguished career as a public representative-one of the longest in Europe.

Construction of the building began in 1884 and the original document, dated January 13th 1885, was signed between William N.Nolan and the Ulster Land Building and Investment Company.

The deeds of the hotel can be traced as follows:

1895 30th January: The property was bought by James Roddy and is presumed to have been run as an hotel and commercial premises.

1907 23rd Sept: James transferred ownership to his daughter Bridget Agnes Roddy subject to certain rights reserved for himself and his daughter Ellen Roddy.

This transfer document is the first official mention in deeds of the building being an Hotel and commercial premises.

1909 Bridget A Roddy legally inherited the property on the death of her father. 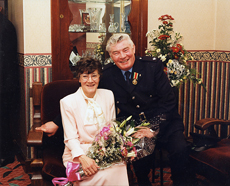 1920 8th July: Bridget bequeathed the hotel to Ellen Roddy now Ellen Rochford subject to the right of Matthias Albert Roddy to remain there as long as he wished. Gerald Roddy their brother inherited the building on the death of Ellen and Matthias.

1945 July 2nd : The Hotel was sold by Gerald (Jeremiah) Roddy by public auction to Michael Snee.

2004 March 1st. The Hotel was bought by Teresa Cawley-Krebs and her husband Pierre Krebs.