The One Act Drama Festival 2018

The One Act Drama Festival 2018

The Western Drama Festival Tubbercurry presents ‘The One Act Drama Festival 2018’. Performances will take place in St Brigid’s Hall nightly from 8pm from Thursday 22nd November until Saturday 24th November. Choose from three plays each night plus two plays on Saturday afternoon with a great mix of entertainment, comedy and drama.

The adjudicator this year is actor and director Mr Geoff O’Keefe, who has adjudicated one act and full-length festivals all over the country since 2009. He has worked for TV, radio and film and regularly facilitates workshops for groups around the country. Geoff also holds an MA in Theatre Studies from DCU.

Everyone is welcome to St Brigit’s Hall which has been regarded as the perfect venue for a festival of drama. The Festival consists of an excellent mix of plays over the three nights which will be performed by the top drama groups in the country. Every year the festival presents a mix of plays and entertainment which attracts visitors and participants to Tubbercurry from all over the country. 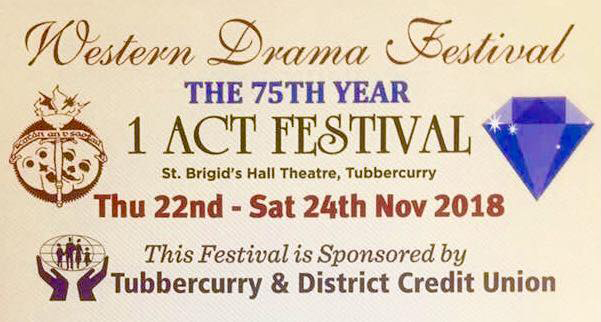 Why not make an evening of it and enjoy dinner and drinks at Cawley’s before you and your friends enjoy an evening at the festival.

Admission to the festival is €10 nightly and a season ticket is available at the ticket office on the opening night for €30.